After working for some years as a guide, Jann started his first company , Båtbyggeran, in 1979, doing wooden boat building and guiding. In 1984 He started Janns Adventure Lofoten AS as a Ltd and has since then changed the name to Lofoten Aktiv AS.

Owned and run by Jann Engstad and he is using only local guides and coaches when needed. The good experience has always been the main focus, this in combination with a high degree of safety and solid knowledge of our nature and the weather has always been the goal.

The nature and us

"Having been an avid user of the Nature my whole life, I find it natural to show respect to the active use of vulnerable Lofoten Nature."

Jann Engstad and his business were also selected by the Executive Committee for Northern Norway and Northern Trønderlag to participate in Interreg IIIB meeting in Iceland, during the autumn 2002, regarding "Sustainable use of nature and natural resources". Jann was also included in the network being built up around the North Atlantic: Nature-Based Tourism. See the website of this network for more information: www.naturebasedtourism.net

Our activities follow the guidelines of WWF Arctic Programme "Tourism and Conservation in the Arctic." The 10 guidelines provide us and our customers a straightforward baseline to stick to during our passage in nature. Some motorized traffic is not legal in Lofoten, including snowmobiles and landing by helicopter outside airports and airfields assigned.

Jann follow up this very closely and the type of activities that he carries out with his guests avoid any unnecessary noise. Jann Engstad is one of the first 5 in Europe with recognized education as LNT-MASTER. Leave No Trace is a training program that was developed in the USA by NOLS (National Outdoor Leadership School) and is a two-year education in theory and practice. Simply LNT is to use nature so no one can see that we have been there and that many can safely use a "clean" area for a long time.

Here are some ground rules for education and practice;

Since 2008, Jann and his company, Lofoten Kajakk/Lofoten Aktiv AS have been "Certified Ecotourism Norway". As the first company of Norway to become certified, he has been a straight and "no-nonsense" factor in the work of making ecotourism present in Norway since the beginning of the millennium.

The Lofoten archipelago is located in the sea, at the north of the Arctic Circle and between the latitudes of 67° and 68°.

The main islands are Austvågøy, Gimsøy, Vestvågøy, Flakstadøy, Moskenesøy, Værøy and Røst. The southern part of the Norwegian island Hinnøya, is politically a part of Lofoten. In the same way, the northernmost part of Austvågøy is politically located in Vesterålen.

The archipelago's total area is 1227 square kilometers and about 24,000 people live in the region. By car, it is 180 kilometers from Raftsundet bridge, in the north, to Å, where the E10 ends. From Lofotodden, on the southern tip of the Moskenes island, it is more than 60 km to Skomvær, the southernmost point in Lofoten.

Lofoten stretches like a rock wall out of the sea. Between the mainland and the Lofoten Islands is Vestfjord. Lofoten scenery offers mountains, peaks and some flatland, open sea and sheltered coves, beaches and pristine lands.

The first people came to Lofoten over 7,000 years ago. During the Stone Age, people made a living out of fishing and hunting. The Lofoten was covered with large pine and birch forests. There were deers, bears, reindeers, lynxes and beavers and the sea was full of fishes, seals and whales. Agriculture developed early. As early as 4,000 years ago, grain was harvested in Lofoten.

The Viking Age saw the emergence of several large chiefdoms. At Borg, in Vestvågøy, some remains of a chiefdom were found with the largest banquet hall known from the Viking era throughout the Nordic region. The building was 8.5 meters wide and 83 meters long. A reconstruction of the building was done at Borg. The Viking Museum at Borg is now open since June 1995. By Kabelvåg, there is a small town called Vågar which was the largest township in the North of Skandinavia during the Middle Ages.

The Lofoten Fisheries has been an important part of the Lofoten history.

In year 860, King Alfred of England, wrote about stockfish that the Viking Ottar brought from Vágar in Lofoten. For King Øystein, fishing was so important that in 1107, he built a church in Storvågan, which was then the center of the Lofoten Fishery. He also built the first fishermens cabins that are mentioned in the saga, in the year 1120. Stockfish, produced from spawning cod was the most important production, and it was pretty much all over Europe. Italy is still the most important market for high-quality stockfish from Lofoten.

From the 1300s on, Lofoten paid taxes to Bergen. This was the beginning of a 600-year-long economic dominance, first exercised by the Hanseatic League, and later by their Norwegian executors. Changing times of famine and poverty were succeeded by periods of good years and great wealth. From the 1860s, came the great herring migrations that became the basis of growth, prosperity and immigration. The basis of today's settlement was established.

The warm Gulf Stream makes Lofoten much milder than other northern areas in the world that are at the same latitude, like Alaska and Greenland.

The coastal climate in Lofoten makes the winters mild and summers relatively cool. January and February are the coldest months, with a mean temperature of minus 1°C. July and August are the warmest months with an average temperature of 13°C . There is a local variation, in the western part it is warmer in the winter and cooler in the summer, and the eastern part of Lofoten is cooler in the winter and warmer during summer.  May and June are the driest months, with an average rainfall of 40mm.

Museum i Lofoten
the best way to grasp the real Lofoten and Vesterålen history.

Ørsvågvær Camping - the camp I am using to set out kayaks.

Henningsvær Rorbuer - rorbu in a unique location in Henningsvær.

Fasthotels - new hotel in a know setting in Svolvær

Lofoten SuiteHotel - first class at the waterfront in Svolvær

The journey to, and around in Lofoten:

VY - environmentally friendly and affordable transport up to Bodø.

Hurtigbåten the catamaran from Bodø to Svolvær and elsewhere along the coast of Nordland.

Ruteopplysning - bus in Lofoten and Vesterålen and to / from Bodø / Fauske

Information about weather and tides

Yr.no
type the name of the place you are going to, then you know the weather.

Kart - Statens Kartverk - some OK maps of our coastline

Are you a group of friends of 4 persons or more, we can arrange a sea kayak courses or guided tour for you.
Contact us 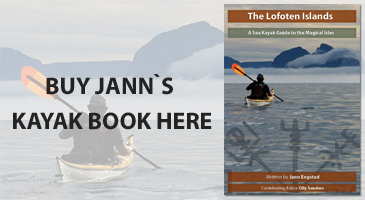 All our coaches are approved by the Norwegian paddling society as activity leaders, tour managers or tutors.

All our trainers have extensive experience.

Lofoten Aktiv have insurance that covers all courses and activities.